This weekend we went to a wedding in PA (shoutout to Leslie & Eric!). On the way there I saw 2 things that you do not typically see on the road. Especially on 495.

The first being a Lamboghini Murcielago. 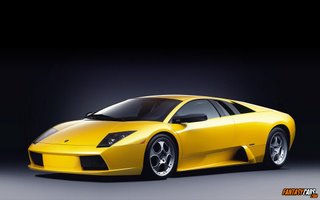 I've always loved the Lamborghini "jack knife" style doors. I think it would be great if more cars went that way. We would no longer have to worry about banging a car door into the car next to ours.

This is actually the same color of car I saw on the road. Shayna asked why exactly, do sports cars come in such garish colors. I think the first part of the answer is because they are European. The second part is that if you are going to spend $300,000+ on a car, you want people to be able to see if from space.

The kicker is that this car was actually on a tow truck. Hope the owner got the extended warranty..

I've seen Lamborghini's and Ferrari's on the road before. However, the next thing I saw on 495 (on the same strip of 495 I might add) was: 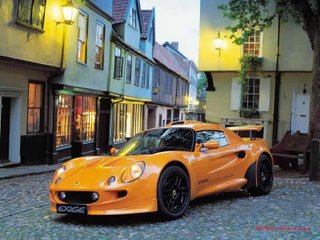 The Lotus Exige (actual color to the left). I had heard of Lotus and played a racing game based on them, but I didn't know much about them. I had thought they were the Asian equivalent of a Lamborghini. Turns out they are the British equivalent of a Corvette.

I have to say though that the red coats got it right. It just plain looked cool. (Again, Europeans with the garish colors..but if I were to have a car like this I would choose orange as well)

I'm not normally a car guy. But I appreciate fine craftsmanship. I appreciate it more when these superfast cars are going 10 mph with me on 495.