I've loved listening to Weird Al ever since I was a kid. Thankfully I've been able to get my wife addicted to his music as well. This past Thursday we went to his concert at the Warner Theater. Shayna got awesome seats. We were in the 6th row center. I thought I wouldn't like the show as much because this is the second time we've gone (I went to a blue man group show in a different city and it was exactly the same as the first one in New York) but it seems as if each show is unique. 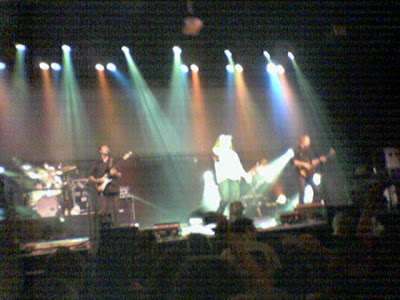 This was during his song called "Cell Phones". The lyrics are:

Other highlights include a strip tease during "You're Pitiful", an interviews with Madonna, K-Fed, Keith Richards, as well as singing to the ladies in "Wanna B Ur Lovr"

If you ever have the opportunity to catch a show, I highly recommend it.